Evolution of a Painting

Earlier in the summer, I took a wonderful online class from Diane Culhane, " Between Speech and Silence." I'm planning to blog more about that course in a separate post. In this post, I'm going to show how two of the paintings evolved during the creative process.

Our goal in the paintings was to suggest a story or dialog by including figures. The beauty of this concept is that story is open to interpretation by the viewer. I love creating mystery in my work and this is a fun new way to accomplish that goal. Here is an early version of one of my paintings. 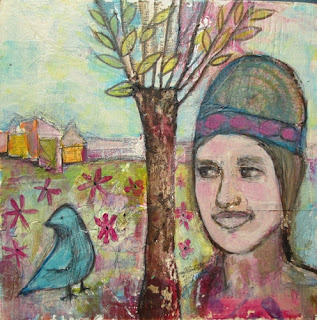 After setting it aside for a few days, I decided that the face was OK, but too big and heavy for the rest of the painting. So instead of the face, I added another bird. It's much more balanced and whimsical to to me now. I wonder what these two birds are saying to each other, don't you? 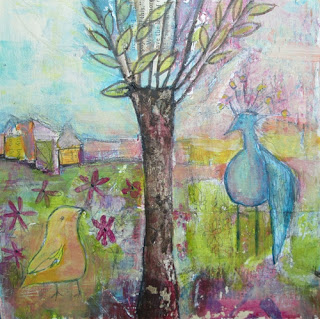 This is another painting from the course, again following the idea of creating dialog with figures. 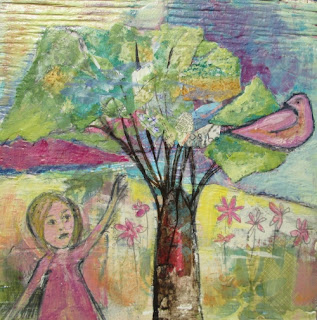 The more I looked at this one, the less happy I felt about it. I decided I didn't like the girl so much, and I wanted to create more interest with the tree. It felt like a children's book illustration to me, which isn't a bad thing, but it wasn't what I really was aiming for. I added some more collage and replaced the girl with an image transfer. 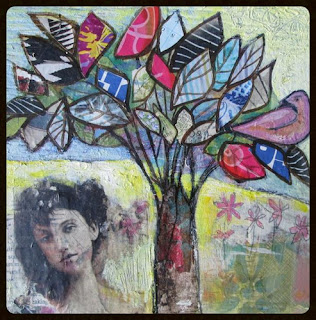 It's so much different now! Overall, I am very happy with the tree, but still not so sure if the bird and face 'go together.' But it's been good to try out the idea of creating a story in my work -- definitely a new concept for me, but a fun way to push myself in a new direction.

Debbie
Seattle
After studying art many years ago and then pursuing other interests, I finally realized that there is no perfect time to do art. Life is now, art is now, hence my new mantra, Art, Life, NowI work in a variety of media including watercolor, collage, encaustic, printmaking and silk painting. This blog is a journal of my creative process. I welcome your comments. Thanks for stopping by!